Virtu Gem is pleased to bring you The National Gem Cut©, a gemstone facet design developed by gem cutters across Kenya, Malawi and Zambia to honor and represent each of their nations through the art of gemstone design and cutting. Virtu Gem held workshops led by Prof. Dr. Adriano Mol which culminated in three unique and branded facet design’s.  Kenya’s Cheetah head,  Malawi’s Mbuna and Zambia’s Eagle.  The concept behind each representational facet goes deep into the heritage and symbols of pride for the respective countries.  The National Gem Cut© promotes inclusion and equity in the gem stone trade by elevating gemstones cut in source countries. 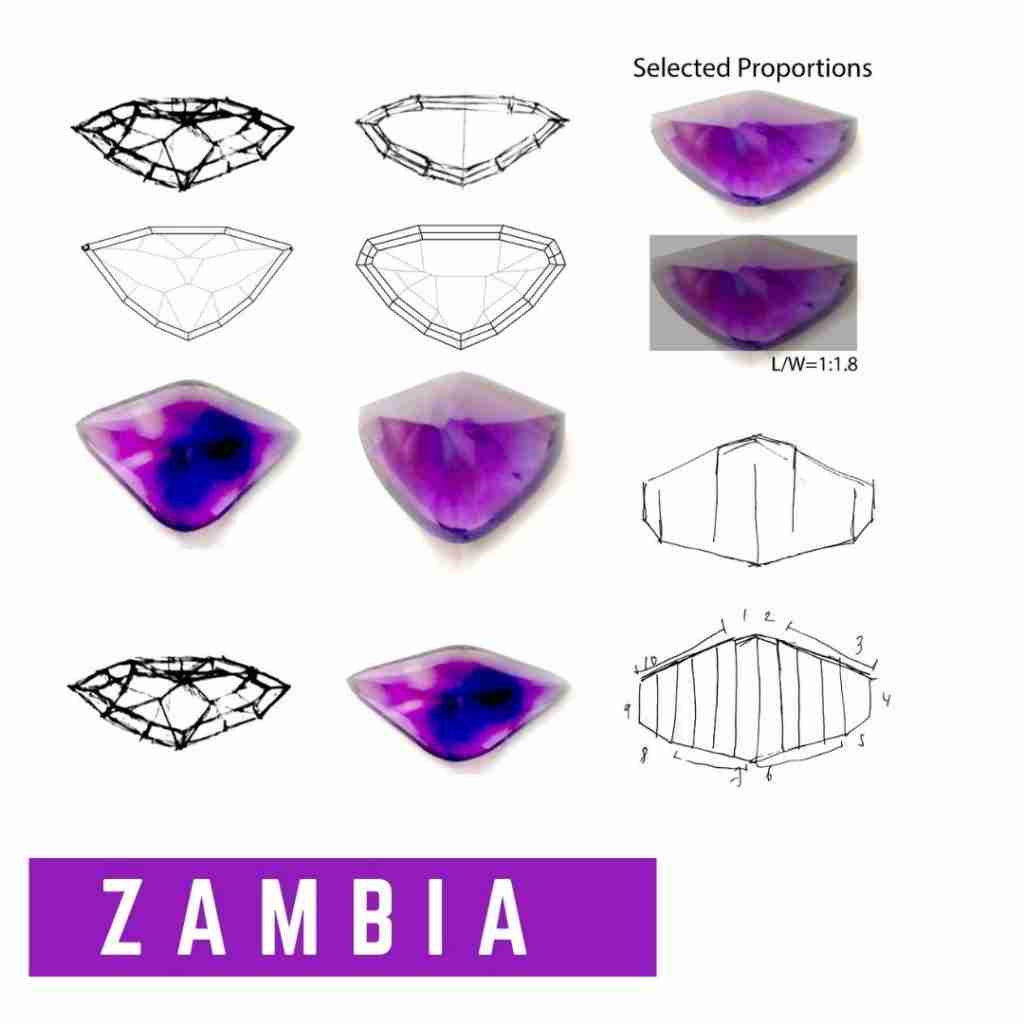 About the Zambia National Gemstone Cut©

Zambia’s National Gemstone Cut© combines the fish eagle which represents the conquest of freedom and the nation’s hope for the future with the National treasure of Victoria falls. The gem shape is a broad wingspan while the facets portray the pattern and power of the falls. 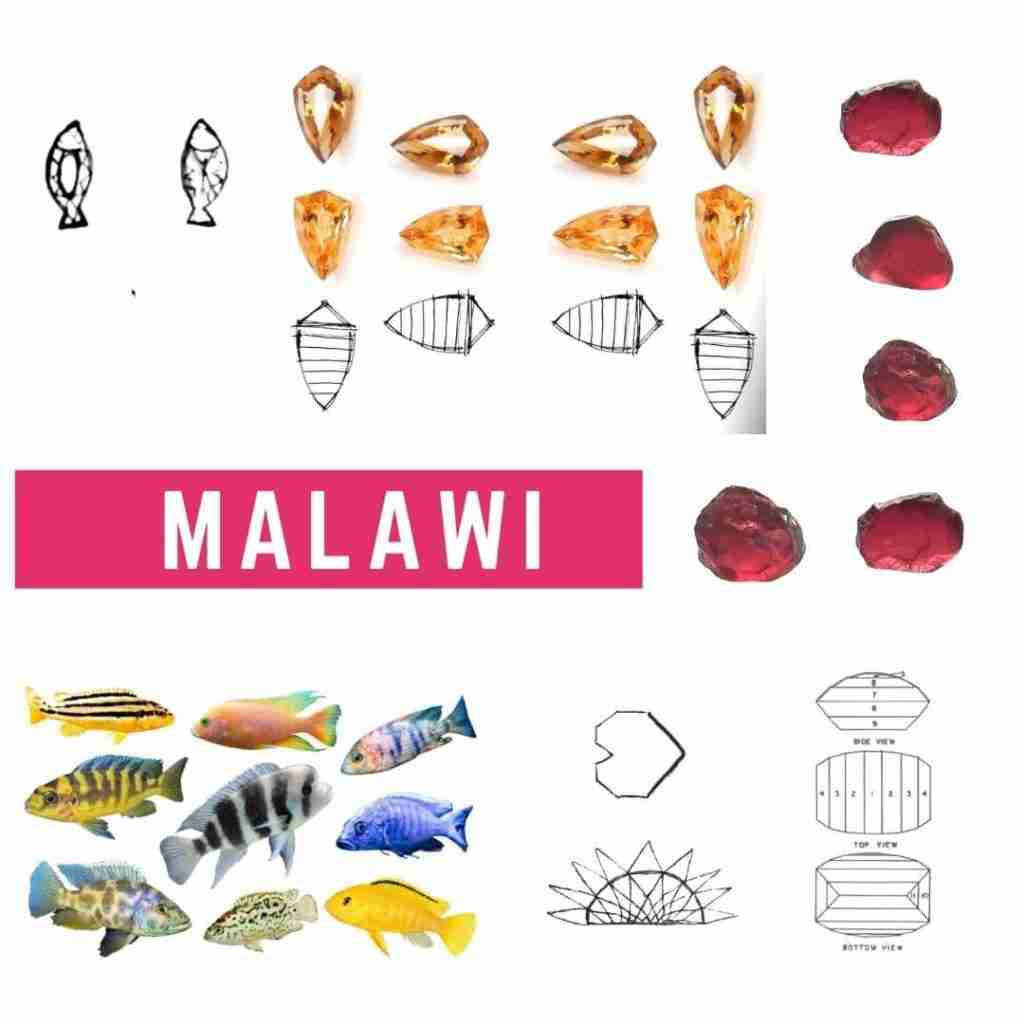 About the Malawi National Gemstone Cut©

Malawi’s  National Gemstone Cut© is based on the spectacular Malawi cichlids, found in the great Lake Malawi. These beautiful colorful little fish come in as many vivid colors as Malawi gemstones. The cichlid’s silhouette is reflected in the gem shape and the color variations are symbolized in the precisely scattered checker board facets. 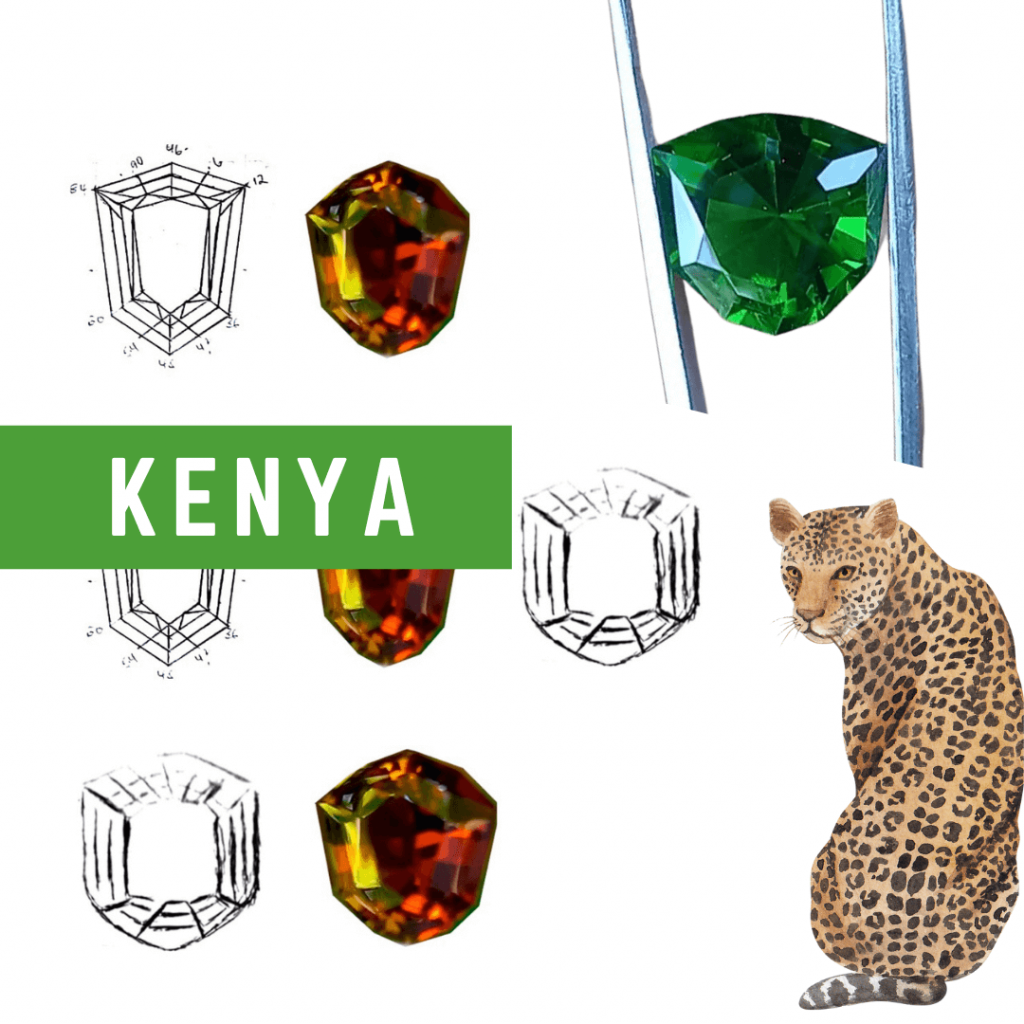 About the Kenya National Gemstone Cut©

The Kenya National Gemstone Cut©  is based on the Cheetah as a symbol of speed and beauty. The Kenyan gem design team collaboratively wanted to emphasize that Kenya was known for speed through its famous runners who dominate as olympic gold medal winners to the elegant cheetahs that run free in the savannah. The cheetah head is reflected in multiple facets across the gemstone design. 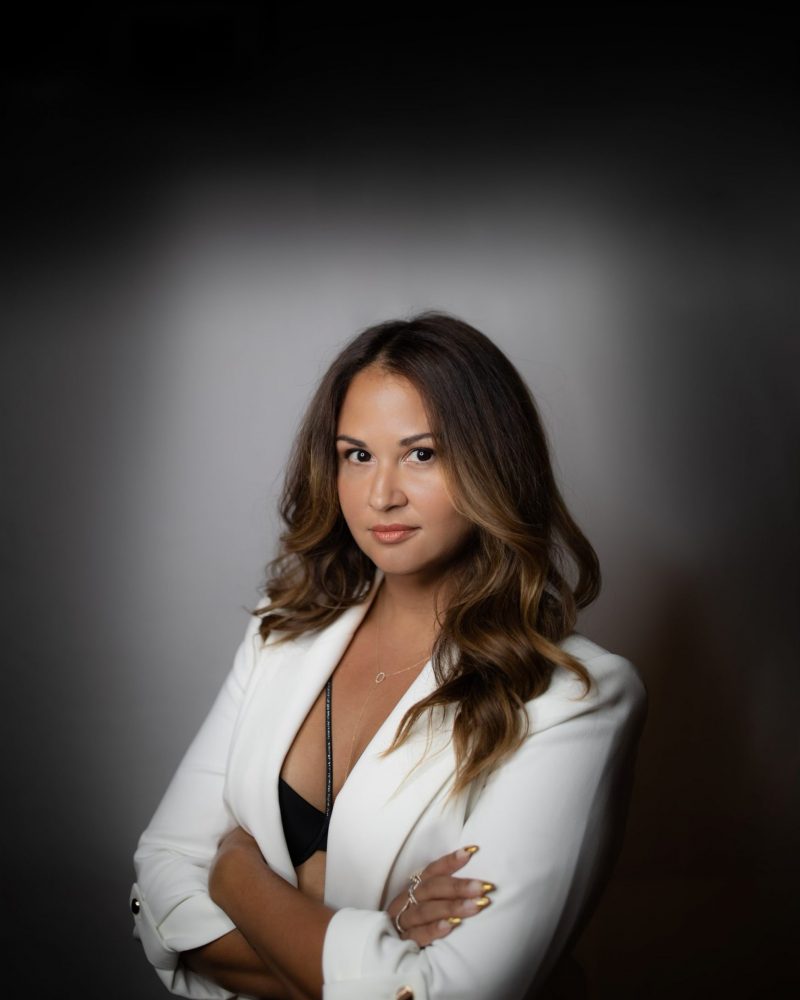 Viviana Langhoff’s work is centered on the idea of heirloom. “Jewelry history, ancestry, and storytelling are all often focused around objects; I’ve always wanted to design work that is elegantly pushing design forward while drawing on our past.”

Viviana established her point of view in the realm of fine jewelry after studying conceptual design at the School of the Art Institute. She continued her education in metalsmithing at Columbia College while simultaneously working under both fine jewelers and contemporary art jewelry makers. She’s now been working in design under her own name for over 10 years, creating custom fine jewelry, interiors, and decorative objects.

Viviana is known for her intricate vintage-inspired metalwork, modern bridal styles, and one-of-a-kind pieces featuring unexpected hues, antique stones, and historical references. Borrowing from the worlds of fine art, cultural adornment, and design, her custom work appeals to the expressive and open-minded individual— those who value individuality, creative collaboration, and are unafraid to stand out.

Viviana’s pieces can be found along 50 other artists’ work at her jewelry store, Adornment + Theory, in the Chicago neighborhood of Logan Square. When not working with custom clients and jewelry, Viviana can be found hosting gatherings, gardening, traveling, and spending time with her partner and two chubby pups. 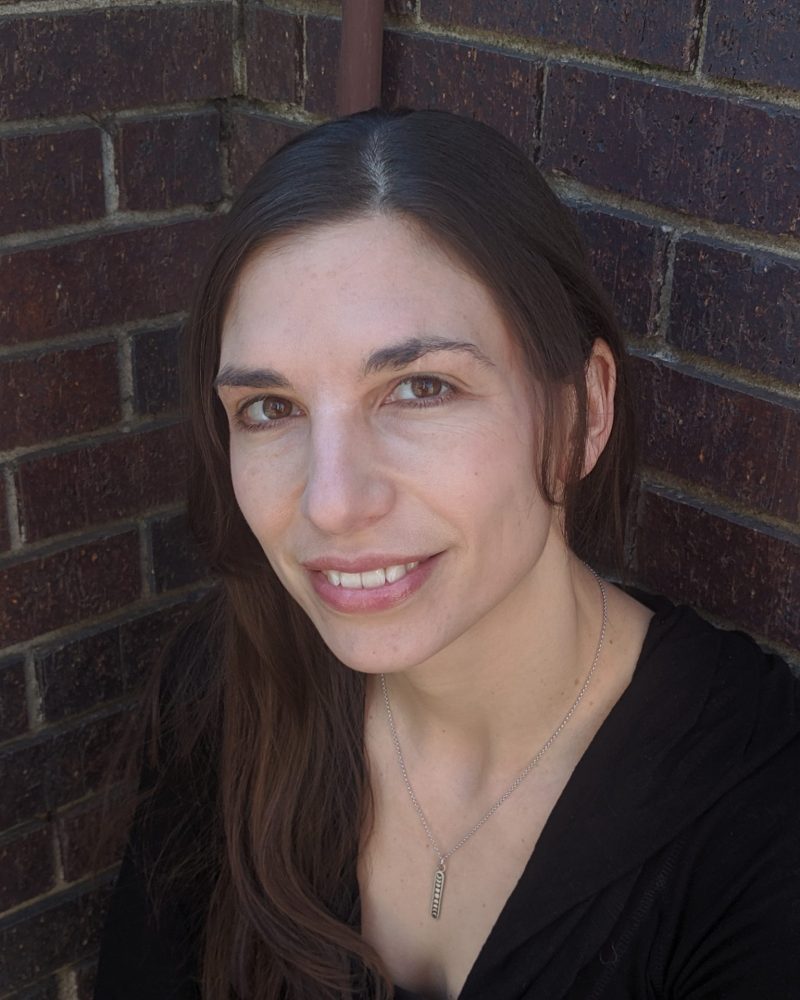 Rachel Cernansky is senior sustainability editor at Vogue Business. She previously covered science, food and agriculture, and global development as a freelancer for the New York Times, Washington Post, National Geographic, Nature, Science and others. Prior to that, she worked in international development in East Africa. She’s from New York and lives in Colorado. 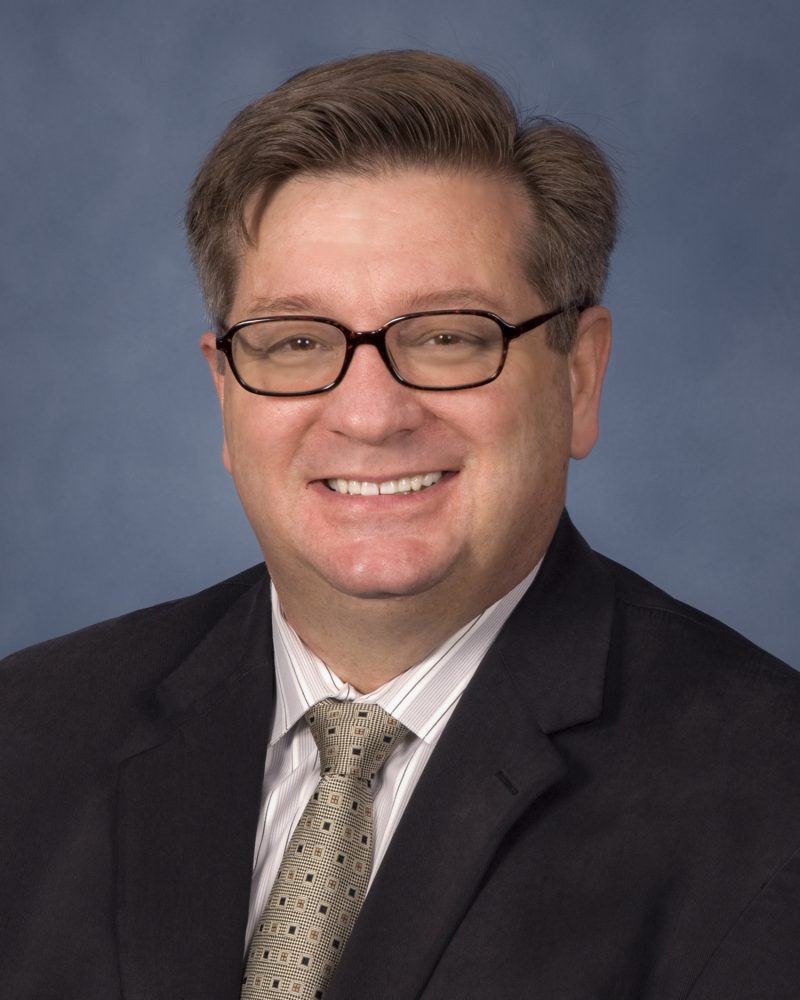 Weldon has reported extensively on gemological issues. He was a senior editor at JCK, and later Professional Jeweler (USA) magazines, before returning to GIA in 2006. Weldon travels to some major gem sites around the world including Burma, India, East and South Africa, Colombia, Bolivia, Brazil, Russia, and several other sources.

Weldon’s photographs are published in scores of international gemological, jewelry and consumer publications, illustrating his own and other authors’ articles, and in several books, including Splendour & Science of Pearls, which he co-authored and edited, and A Rough Guide for Artisanal Miners. Since 2008, his photographs appeared regularly on the covers of GIAs Gems & Gemology.

Recent peer-reviewed articles by him and co-authors include: The Museum of London’s Extraordinary Cheapside Hoard (Fall 2013); Botswana’s Scintillating Moment (Summer 2014); In Rainier’s Footsteps: Journey to the Chivor Emerald Mine (2016), and Brazil’s Diamonds: A Historical & Recent Perspective (2017). Gem Virtuosos: The Drehers and Their Extraordinary Carvings, a story about Idar-Oberstein’s celebrated Dreher carving family, was published in the 2017 Winter issue of Gems & Gemology. 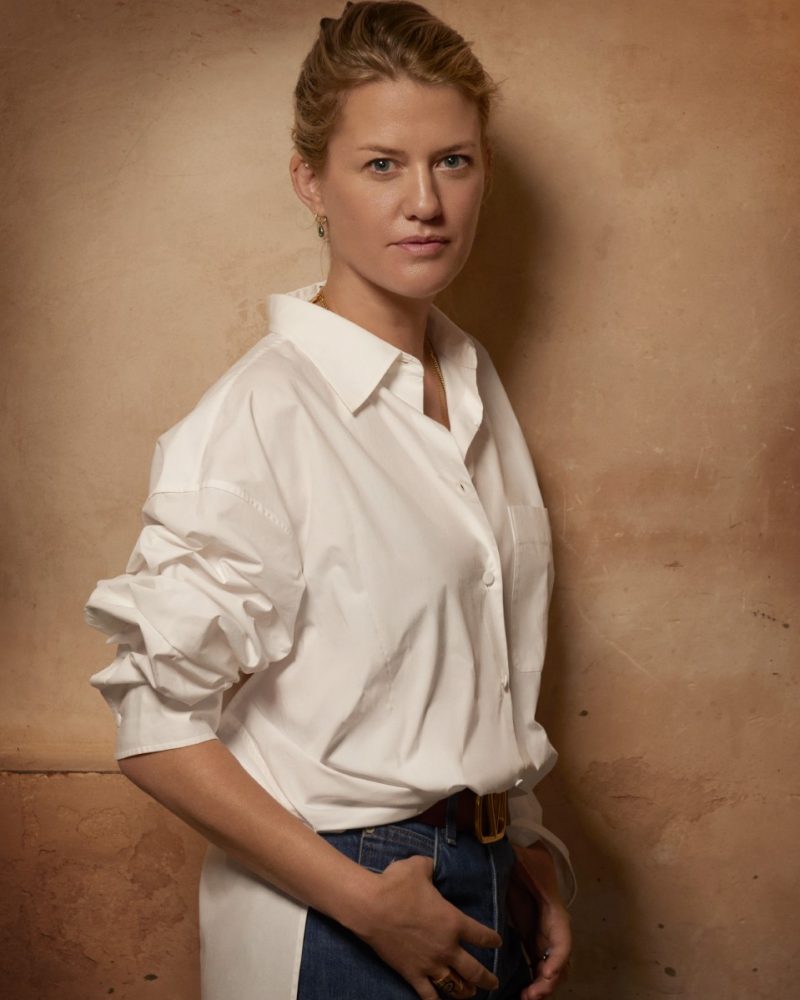 I believe the most important question everybody should ask regarding what goes into jewellery is “who benefits from this?” I feel it’s my job as a journalist to educate the consumer – and jewellers – on what to ask when buying jewellery and the materials that go into its making.

Melissa Quick has 25+ years of experience in the luxury retail space.  As President of Steve Quick Jeweler she has helped the company to become one of the most respected independent jewelry stores in the country.  Specializing in small batch designers, creators and makers has allowed Melissa and her team to be more involved in the process of responsibly sourcing and making jewelry.  She continues to direct her company toward more sustainable & transparent practices as she looks toward the future.  In addition Melissa is proud to be a board member for Gem Legacy, support  jewelry industry initiatives like Mercury Free Mining & the Chicago Responsible jewelry Conference, and of her membership in the American Gem Society, an invitation only organization whose mission is to promote ethics and education in the jewelry industry.